The Erotics of Grief considers how emotions propagate power by exploring whose lives are grieved and what kinds of grief are valuable within and eroticized by medieval narratives. Megan Moore argues that grief is not only routinely eroticized in medieval literature but that it is a foundational emotion of medieval elite culture.

Focusing on the concept of grief as desire, Moore builds on the history of the emotions and Georges Bataille's theory of the erotic as the conflict between desire and death, one that perversely builds a sense of community organized around a desire for death. The link between desire and death serves as an affirmation of living communities. Moore incorporates literary, visual, and codicological evidence in sources from across the Mediterranean—from Old French chansons de geste, such as the Song of Roland and La mort le roi Artu and romances such as Erec et Enide, Philomena, and Floire et Blancheflor; to Byzantine and ancient Greek novels; to Middle English travel narratives such as Mandeville's Travels.

In her reading of the performance of grief as one of community and remembrance, Moore assesses why some lives are imagined as mattering more than others and explores how a language of grief becomes a common language of status among the medieval Mediterranean elite.

Find this book on Amazon 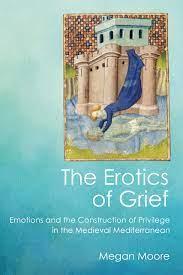